This walk was around Ashdown Forest, a place that was home to the author A. A. Milne who wrote the story of Winnie the Pooh. The Ashdown Forest is situated in the Weald of Sussex with the main London to Eastbourne Road (A22) cutting right through it.

My journey started from Gills Lap car park, situated just off the B2026 road that runs between Hartfield and Fairwarp. I have visited the forest all of my life and can always recall an Ice cream van was parked in this car park every time I was here, it’s funny how you remember the small things. Today though no van, probably due to it being a Thursday, and not a lot of customers from the dog walkers.

Leaving the car park heading north towards the memorial plaque for A. A. Milne and EH Shepherd, turning west toward the Lone Pine.

From here I decided to take a shortcut through the gorse bushes, big mistake, thinking it was only a few yards. The few yards turned into about 200 metres of thick gorse bushes,  that in some places you could see the tracks that wild animals had taken, but not really suitable for an adult.

I finally emerged from the gorse and was covered in lots of dried bits of it, the heather, and whatever else I crawled through. I decide to stop at the memorial for Milne and Shepherd, mostly to remove the remnants of my gorse expedition from my hair, ears and neck. 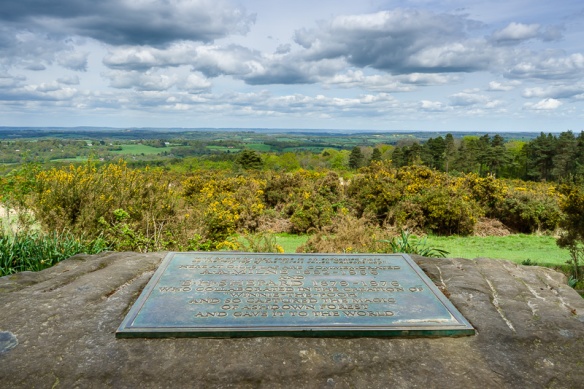 Leaving the memorial I continued north reaching the road near Chuck Hatch turning left and then right into Marsh Green Lane. It was here that I encountered a map issue, according to my OS map there was a bridleway out to Pooh Sticks bridge. It wasn’t until I reached the other end of the missing bridleway via a footpath through Posingford Wood, that I read a large sign informing me that the bridleway had been redirected, pity that they forgot to place a sign the other end.

Reaching Eeyore’s shelter I knew I wasn’t far from the bridge, and sure enough about 200 meters further down the track I arrived at the bridge. 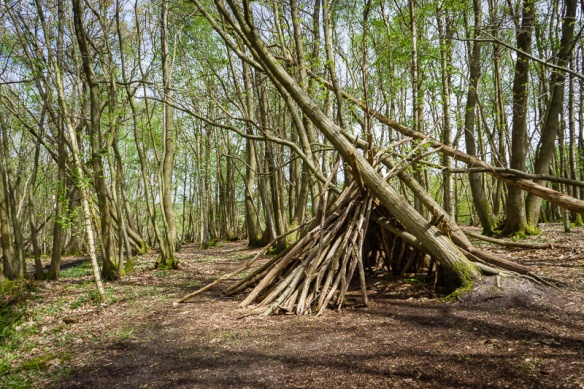 Further up the track, I spotted Piglet’s House, looking in need of a bit of maintenance, as it was leaning badly to one side and had lost a considerable large chunk of the rear of it.

From here I could have continued on the track into Hartfield, but I needed to return home, so I retraced my steps back to the car park. Although I did have time to stop by Roo’s Sandy Pit not far from Gils Lap car park. The Sandy Pit was not very sandy just a large sunken hole with a little puddle of water.

I also took a couple of close-ups of the flowering gorse and bluebells on the route. 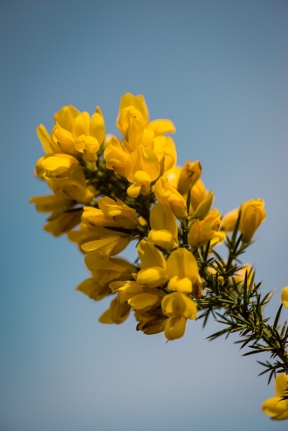 This is a map of the walk, the route was just under 5 miles.